Industrial Symbiosis in a Circular Economy

Posted by Stefan Danielsson Posted on November 3, 2017 Categories: Circular Economy, Sustainable Companies Comments are off for this post

Trust and thrust between heavy industries has become a key to success in forming industrial symbiosis.

Why are dozens of foreign political delegations from Washington, through Beijing, to industrial representatives from Seoul, so curious about knowing more about the Kalundborg industrial Symbiosis? Schoolchildren from Belarus and talents from business, management, technical universities from around Denmark eager to learn more? Well, the answer is simple. They want to learn more about a field in which Denmark is a front runner. Because it is awesome. You will have to agree with me on that!

Let me brush up the inherent meaning of symbiosis. You might recall from the biology class, where mushrooms exchange nutrients with trees and provides it with protection against toxins. The Greek term means “cohabitation” where parties interact in a co-existing network.

Industrial symbiosis is a subset of the academic term ”industrial ecology” which again is a subset of the “circular economy” umbrella. In 2015, EU set a roadmap for creating a circular economy society. It stimulates sharing economy, promoting a circular mindset over a linear one, and considering waste as a resource. We need to improve at utilizing existing technologies efficiently and creating recycling systems that help reducing burdens on natural resources. This way we can score the ultimate goal, reaching a decarbonized society.

Circular economy is somewhat based upon the waste hierarchy. It urges a reduction of waste generation before recycling or transforming it to other forms. Our consumption is growing, but the resources are finite. We will need more and more planets to sustain our current consumption. So how to create “more with less” in industry?

We have the quite self-explanatory industrial ecology category. The analogy of natural systems inspires and aids the understanding of how to design sustainable industrial parks or optimize systems. The approach would be to unite engineering and economic disciplines in a cross disciplinary holistic manner. Industrial parks, or eco-industrial clusters, are zones in which small or large manufacturing companies are located. Often those companies just operate independently and do not communicate, especially if competitors. This text, however, focuses on settings with large/heavy industries only. I will discuss small and medium size enterprises (SMEs) industrial symbioses in another blog.

Industrial symbiosis is a cooperation where two or more industrial partners carry out joint solutions to obtain mutual benefits. It brings perspectives from various angles. The most common being companies exchanging resources in terms of material, water and energy. In other words, one company’s byproduct/side stream becomes the input of the other company in its direct or indirect production. Even simpler: “One’s trash, another’s treasure”. Full utilization of residual flows is often the purpose, preferably in a cascade. Otherwise (down-cycled) lower-value streams are “recycled” in productions where quality satisfies the need. One example is deionized cooling water that can be included directly as makeup water or steam (higher temperature). It becomes useful district heat quality (lower temperature) after serving in a process. Another example being organic wastewater from which energy can be utilized in different ways before ordinarily treated.

Thus both parties can help to optimize upon resource consumption, thereby enjoying several economic and environmental benefits, including PR. Some to mention on a company level are access to cheaper resources, minimized waste handling costs, and increased competitiveness. On a regional level benefits include innovation, reduced resource demand (and thereby CO2) and reduced import dependency. All of this is contributing to growth and resilience among the involved partners and beyond. 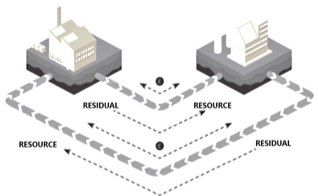 Furthermore, a symbiosis can reflect partnerships where the parties co-invest in joint projects for mutual benefit. For example two neighboring companies establish a common wastewater treatment plant, rather than individual, which often yields economies of scale. Another form of symbiosis cooperation may be the sharing of land or even facilities and, in extreme cases, labor.

Due to the global diversity of industrial parks and legal frameworks, no specific cookbook for establishing successful industrial symbiosis exists.  Industrial parks can go through several stages to obtain different degrees of maturity. Apart from vicinity and volume potentials for a lucrative business case, some key ingredients to success are communication, trust and thrust. And that we are pretty good at in Scandinavia.

Soon DONG energy will shift from coal to biomass combustion. Thus there will be no more ash and gypsum to deliver. New business contracts and streams emerge, others terminate – but the system survives, as the awareness continuously grows with new learning.